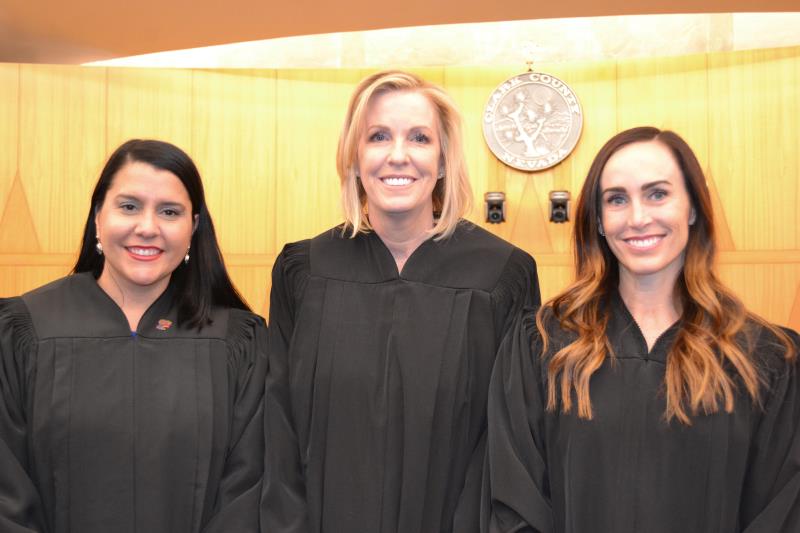 Investitures offer a personal glimpse into the person who wears the robe and makes decisions that have a profound impact on many lives. The June 21 investiture for three new judges who joined the Nevada Eighth Judicial District Court Bench, had the usual pomp and circumstance of a ceremonial judicial oath. Family and friends of judges Jacqueline Bluth, Christina Silva and Rhonda Forsberg filled the Clark County Commission chambers. Speaker after speaker stood before the crowd that included judges from various Nevada courts, to share why each of the new judges was well-suited and deserving of the appointment by Nevada Governor Steve Sisolak to the District Court Bench. One of the last presenters, Attorney Radford Smith who presented for Judge Forsberg, pointed out that theme of the investiture should be strong women. After taking their oath and ceremonial robing, the judges thanked the governor for their appointment, thanked those who inspired and helped them along the way, and shared a little bit about how their passion to help others led them to the bench.

Prior to her appointment, Jacqueline Bluth worked for 12 years in the Clark County District Attorney’s Office where she served as the chief deputy district attorney for the homicide division. She was responsible for litigating a large homicide caseload. Prior to her work at the DA’s office, she worked as a law clerk at the Law Offices of Bradley, Drendel, and Jeanney, and at the Law Office of Benson and Bingham. Judge Bluth received her Juris Doctorate from the William S. Boyd School of Law at the University of Nevada, Las Vegas and her Bachelor of Arts in criminal justice from the University of Nevada, Reno.

Prior to her judicial appointment, Cristina Silva was chief of the Criminal Division for the U.S. Attorney’s Office for the District of Nevada. She was first an Assistant United States Attorney (AUSA) in the U.S. Attorney’s Office for the District of Nevada for over eight years, prosecuting gang, violent, and drug offenses, including the unlawful distribution of opioids by doctors, as well as human trafficking, child exploitation and financial-based crimes. During her tenure as an AUSA, Judge Silva also served as the Deputy Chief of the Organized Crime Strike Force, overseeing programs including Project Safe Neighborhoods, Project Safe Childhood, and Organized Crime and the Anti-Gang initiative. She began her legal career as an Assistant State Attorney at the Miami-Dade State Attorney’s Office, where she became the Assistant Chief of Litigation of the Domestic Violence Unit. She earned her Juris Doctor from the American University Washington College of Law and her Bachelor of Arts in Political Science and Spanish from Wellesley College.

Prior to her appointment, Rhonda Forsberg served as a pro tem hearing master for both domestic violence/temporary protective order (TPO) and family discovery court. She also worked in the insurance industry for 20 years. While in law school, Rhonda worked fulltime for The Leavitt Insurance Agency, prior to working for Radford J. Smith, Chartered, as a law clerk. After receiving her Juris Doctorate from the William S. Boyd School of Law at the University of Nevada, Las Vegas, she work as an associate for Radford J. Smith, Chartered (later known as Smith Forsberg) and then opened her own law firm as a solo practitioner.