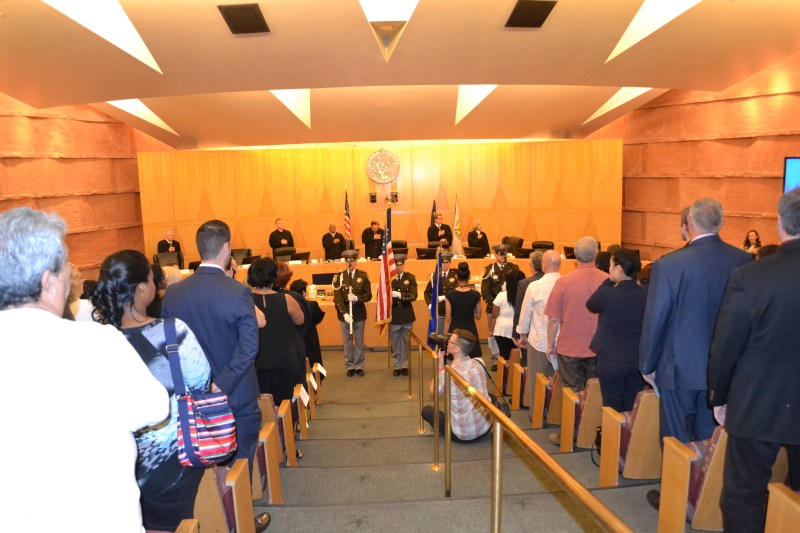 Investitures are formal ceremonies for family, friends and colleagues. Fellow jurist enter in a procession wearing their robes to convey the significance of the investiture. The ceremonies offer a glimpse into the person who will be making weighty decisions from the bench that will profoundly impact lives.

Judge Tierra Jones leaves a post as a deputy district attorney for Clark County to take the bench. She also served as a district attorney in Nye County and public defender in Clark County. Judge Jones is from  Hawthorne, Nevada. She attended University of Nevada, Reno and received her Juris Doctorate from the University of Nevada, Las Vegas William S. Boyd School of Law.

Judge Mark Bailus takes the bench after working in private practice with a focus on complex civil and criminal litigation and appeals at the law firm of Bailus Cook & Kelesis, Ltd.  Judge Bailus’ professional experience also includes a partnership in the law firm of Cherry Bailus & Kelesis, serving as general counsel for Nevada Beverage Company and as an attorney with the Clark County Special Public Defender’s Office.  Further, he was on the Ombudsperson Panel to represent the deceased family and public at the Police Fatality Public Fact-Finding Review hearings. Judge Bailus is a graduate of the University of Nevada, Las Vegas and received his Juris Doctor from Pepperdine University School of Law.

Judge David Jones is a Las Vegas native and Valley High School graduate. He attended Arizona State University. After graduation, Judge Jones taught Government, World and U.S. History at Rancho High School. After several years as a teacher, Judge Jones attended University of the Pacific, McGeorge School of Law, graduating with honors. Judge Jones’ professional experience includes a long-term partnership at Rawlings, Olson, Cannon, et al., and a partnership at the law firm of Lewis Brisbois. He was also the managing attorney for the Plaintiff based firm of David Allen & Associates. His work includes presiding over short-trials, mediation and arbitration, and the Truancy Diversion Program.