Pro bono work has its rewards 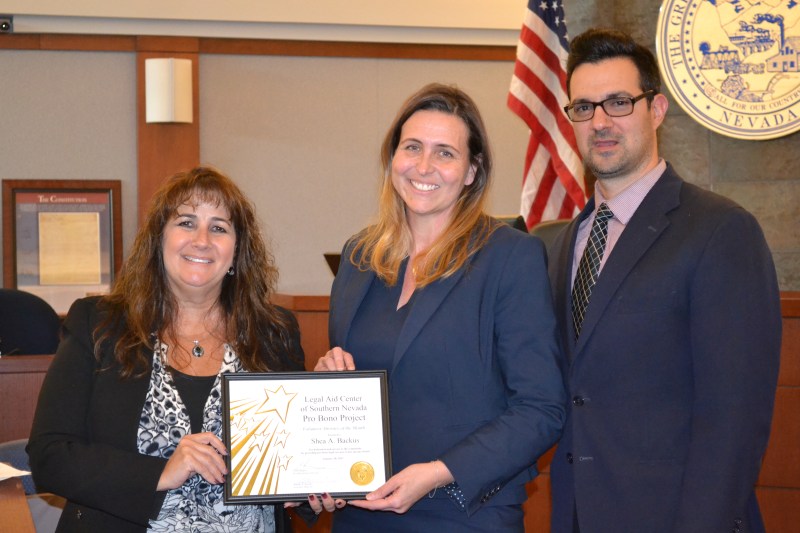 The judges of the Eighth Judicial District Court recognize the important role that those who take pro bono cases serve to ensure that justice is served. Every month at the Civil Judges’ Meeting and Family Division Bench-Bar meetings, the stories of how a child’s life was made better or a senior citizen’s finances were salvaged are shared when the Pro Bono Volunteer of the Month is recognized by the judges and the Legal Aid Center of Southern Nevada.

Many of the judges themselves are committed to conveying the important life changing impact pro bono legal representation can have for a child or a person who would otherwise be unable to afford needed legal counsel. For example, this year Judge Joanna Kishner was awarded the Justice Nancy Becker Pro Bono Award of Judicial Excellence for her work elevating pro bono awareness and recruiting attorneys. Judge Kishner is one of the judges who have visited numerous law firms urging them to handle pro bono cases.  She received the Nancy Becker award, for her involvement in programs that promote pro bono work including the “Excuse me, I have a line pass because I’m a pro bono superstar” campaign, in which pro bono attorneys’ cases were called first on the docket.

Line passes, judicial recognition, and awards are definitely nice, but the truly rewarding part of pro bono work is that representing someone pro bono can make a world of difference for someone in need. Below are stories on lawyers who have stepped up to step in and do pro bono work.

Eric Walther, an attorney at Kolesar & Leatham, is the April Pro Bono Attorney of the Month recognized at the civil judges’ meeting. Eric began volunteering with Legal Aid Center of Southern Nevada in 2016. He took his first pro bono appeal case only a few months after finishing his clerkship. By taking a pro bono appeal case, Eric got the opportunity to argue a case before the Nevada Court of Appeals in just his first year of practice—something that many attorneys never experience. He expressed that pro bono cases allow him to serve some of the most vulnerable members of our community while gaining invaluable legal experience along the way.

Elizabeth Brickfield an attorney with Dickinson Wright, PLLC was honored at the civil judges’ meeting as the February volunteer of the month for her outstanding pro bono work. Elizabeth has been volunteering with the Legal Aid Center of Southern Nevada for over 10 years. She has accepted 18 pro bono cases in areas including: guardianship, adoption, termination of parental rights, wills and estates, divorce, custody, child abuse and neglect, and probate. Elizabeth also volunteers for the probate Ask-a-Lawyer Program and mentor other volunteer attorneys. A memorable pro bono case for Elizabeth was helping African refugees who needed assistance with guardianship of their granddaughter. With Elizabeth’s help, the grandparents obtained guardianship and the child’s name was changed and she was enrolled in school. Elizabeth said, “No one should go through life with a birth certificate listing their name as Baby Girl with the last name of the mother who abandoned you at birth.”

Emily McFarling of McFarling Law Group began volunteering with Legal Aid Center of Southern Nevada in 2013, she has accepted a numerous pro bono cases in a range of areas. She waas recognized by the Family Division for her outstanding service including the Legal Aid Center’s Partners in Pro Bono program in which lawyers and law students are matched up to work together on a pro bono case. Emily conveyed that she is particularly sensitive to issues of domestic violence, such as when victims are cut off from their finances, making it very difficult for them to leave their abuser and especially difficult to have the assistance to do so. A case that made a significant impression on Emily was when she represented a biological father who filed a paternity action prior to his child’s first birthday only to have it dismissed because the mother had placed another man on the birth certificate.  Emily represented the father on appeal to the Nevada Supreme Court. She succeeded in getting the dismissal reversed, and on remand was able to get the other man’s voluntary acknowledgement of paternity set aside and joint physical custody established for her client.

Shea Backus is a shareholder at Backus, Carranza & Burden and the January pro bono attorney of the month recognized at the civil judges’ meeting. Shea has been volunteering since 2012 with a focus on representing children in abuse and neglect cases.  She also volunteers for the Ask-a Lawyer sessions and mentors attorneys at her firm who are interested in doing pro bono cases. A memorable case for Shea was a teenage girl who was shuffled through multiple foster care placements over four years. Shea was a consistent figure who was able to get the teenager medical and mental health care. At her recognition ceremony, Shea was quoted on the case involving the teenager. She said, “While I may have made a slight change in her life, she had a big impact of mine and my understanding of mental health, child abuse and neglect and the juvenile justice system.”

Carrie Primas is an attorney with Hanratty Law Group. Since 2013, Carrie has accepted a number of  pro bono cases for which she was recognized by the Family Division. She assists low-income clients and children in a variety of matters, including child abuse and neglect, domestic violence, divorce and custody. Carrie also participates in our Family Law Ask-A-Lawyer program.  Carrie does pro bono to help people who do not have the resources or knowledge to know where to start in their legal battle. She conveyed that she believes they are just as entitled to justice as somebody who can afford the best attorneys. Her first pro bono case in which she represented five siblings who were removed from the home due to the father’s abuse of an older sibling, left an impression on Carrie. It was apparent during their visits with the mother that there was a strong bond and these children wanted to return home. With Carrie’s advocacy helped to get the children returned home safely and the case was closed.

Each of those recognized for pro bono work are a hero in their own right. They have given of their time and energy to make someone else’s life better. We applaud their work and the work of all those who have stepped up to handle cases pro bono.  To participate in pro bono work, visit www.lacsnprobono.org or call 702-386-1413 to select a pro bono case.