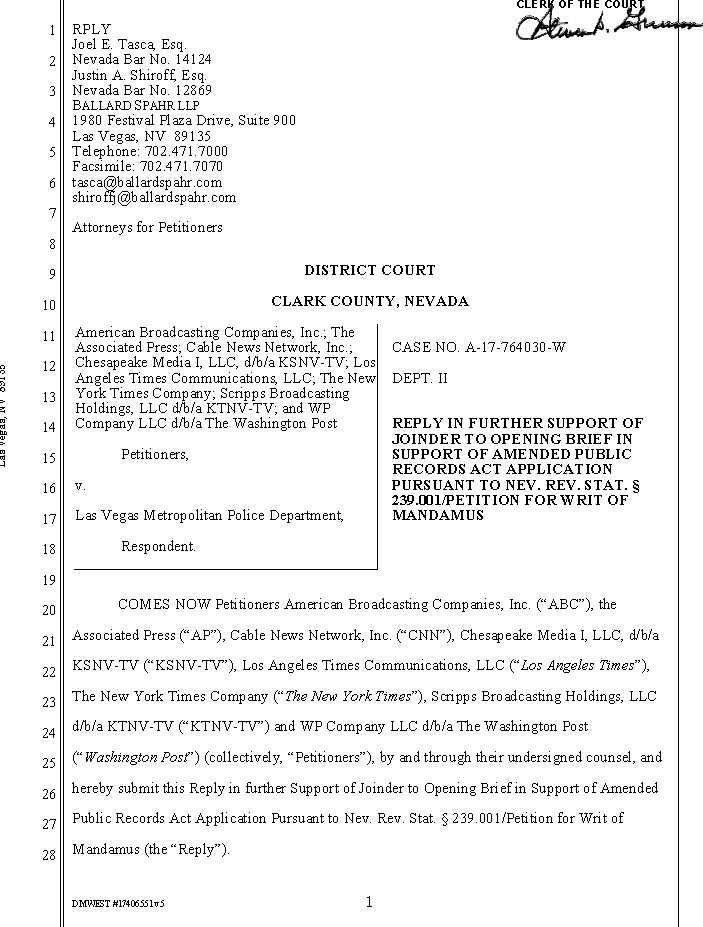 Judge Richard Scotti ruled to grant a petition filed by media outlets for the Las Vegas Metropolitan Police Department for the release of video from body cameras worn by police, 911 calls evidence logs, surveillance video, interview reports and other materials from 1 October. Judge Scotti cited the Nevada Public Records acts and the Constitution when making his ruling. He said, “The Nevada Public Records Act, and the First Amendment to the Constitution provide the press with the ability to obtain and publish information about issues that affect the public interest; about the conduct of government officials; and provides the press with the tools to insure that the government is responsible and efficient. Furthermore, they provide the press with the tools to assist the public in holding its government accountable.”

Prior to his ruling, Judge Scotti said, “First and foremost, Metro officers, and all other public safety officers, must be praised for their courage, bravery, and resourcefulness in protecting the public, and conducting its investigations.  But this petition is not about the conduct of Metro. This petition is about public access to public records so that the purposes of the First Amendment may be achieved.”

Judge Scotti ordered rolling disclosure of the material. He ruled that personal information could be redacted and protective orders could be pursued for information that could compromise the investigation. The judge cautioned that the right to seek a protective order should be used sparingly. Attorneys were given a week to brief the issue of the records production costs. Judge Scotti said the he would then issue a minute order regarding the issue. He also ordered a status check on March 7 at 9 a.m.